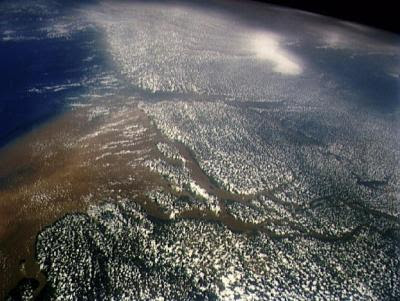 By simply utilizing what nature has to offer in terms of water, scientists from Stanford University have developed an effective way to generate electricity naturally and without causing pollution. Yi Cui, associate professor of materials science and engineering at Stanford, and his colleagues have developed a system that generates electricity using electrodes and a combination of freshwater and saltwater -- and nothing more.

The process involves the utilization of ions found naturally in saltwater, as well as those generated by electrodes submerged inwater. A positive and negative electrode pair are first used to charge freshwater with ions, which is then drained and replaced with saltwater. The saltwater, which is naturally up to 100 times more ionic than the freshwater, increases the voltage causes a net gain inelectricity. This electricity is then captured and stored in large batteries.

"The voltage really depends on the concentration of the sodium and chlorine ions you have," Cui said. "If you charge at low voltage in freshwater, then discharge at high voltage in sea water, that means you gainenergy. You get more energy than you put in."

To view a diagram that visualizes how the technology works in practice, visit:
http://www.eurekalert.org/multimedi...

For the positive electrode, the team chose manganese dioxide as the primary material because this compound is environmentally-friendly, plentiful, and viable for large-scalepowergeneration systems. The team is still searching for a practical negative electrode material, however, as the silver used in the experiments is too expensive for large-scale use.

Optimal locations for Cui and his team's power generators would be along river mouths and estuaries where freshwater naturally mixes with saltwater as it flows into the sea. According to the team's calculations, if every river in the world were to be equipped with these water power generators, the energy produced would represent 13 percent of the world's current overall energy consumption.

Sources for this story include:

Source: Natural News
Posted by moonbraker1 at 8:23 AM